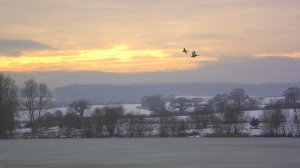 I’ve had a rather chaotic few days, as you can probably guess.

Firstly, I’ve locked down my flickr photostream. Sadly this breaks many links around my own blog, and the web in general, but I was fed up (really) of idiots and freaks deciding my photos were there to do with as they wished… bands, labels, anyone – the little “all rights reserved” bit seems to make no difference at all.

Friday was the last snowy day… or should I say the last day with any amount of snow on the ground. A rainy night put paid to that and caused flooding all over the place and on Saturday Morning you wouldn’t have believed we’d had any snow at all!

The BOTY awards night was a good night, but I am growing very weary of the same old same old which seems to dog the awards. The blinkered attitude of many voters who decided that IQ’s rather lacklustre album Frequency was the best thing since their last rather lacklustre album does annoy me. In my opinion, IQ’s last actual really good album was Subterranea and even that was a little over long and padded out for my liking… but did have some very good high points. The Seventh House was weak beyond belief, and Dark Matter felt like they’d attempted a return to their old sound but in places missed the point somewhat, although Sacred Sound was good but Harvest of Souls feels too much like lots of half arsed tracks glued together.

… and I’m sorry but … John Jowitt best bass… AFUCKINGGAIN?!?!?!?! – does no one know of any other bassists out there? Moo from Touchstone? Bill Burnett from Sphere? just two and far superior as far as I can see… and I should know what I’m talking about after all, I am a bassist!