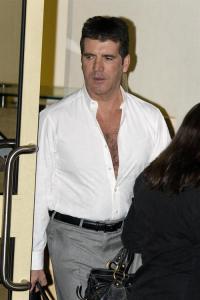 Music, however… isn’t.
In this time of MP3 self important twats like Simon Cowell must be shitting kidneys at the thought that his already massive pot of shekels could soon be shrinking somewhat.
Once upon a time people like him used to make or break a band. You had to have a label because you couldn’t get a record out otherwise, and if you weren’t quite to their liking you didn’t get the deal. If you did get the deal it was in the order of 5% of 5% of 5% and people like this man <- made loads of money off your back for very little work.
Now the problem is… they still behave like this. To quote a rather stunning artist played on Radio 2 rather a lot recently “I went to xxxxxxxx record label and they said they weren’t signing anyone unless they came in through a talent show such as X-Factor”. xxxxxxxx was a bloody big label!
She decided to go it alone and now charts regularly. You can probably guess who it is…
Many other bands have done it without the label – The Arctic Monkeys rather famously being the first go-it-alone band who charted and started playing arenas, yet had no label. The internet is a powerful tool… record label bosses? they’re just tools.
Now onto other things… Ronnie James Dio… the man – the legend. Without this man millions of rock fans would not be making the devils horns symbol at gigs, nor would we be listening to such epics as Holy Diver… and his time with Rainbow and Black Sabbath was unforgettable.
The problem is… the BBC don’t seem to get this.
When Michael Jackson died, it was headline news… it was headline news for far too long… because he was the “king of pop”, apparently.
RJD dies… it’s shovelled in a corner of their website.
Jade Goody sadly dies (oh the irony) of ugliness (which, apparently, is fatal if not treated with a smack in the gob) and oh dear – the papers go mad, because, oh if only Diana and Jade were still here… they’d make it right. Oh for fucks sake, she was a leeching, racist, self promoting chav of the highest order… we wouldn’t mourn if four chavs were killed in a Citroen Saxo VTR roll-over accident we’d call it NATURAL SELECTION.
Anyway, enough ranting, because I rant too much – apparently.
Instead – why not bask in the glow of Holy Diver and think of Ronnie James Dio.
Ronnie… WE SALUTE YOU!