Friday’s Allan Chapman talk was postponed due to the horrible weather (lots of snow) and so we had a nice night in the house.

Saturday, on the other hand, was set to be a very busy day. First, Mum’s boiler is playing up, so I had to go and get that going again.

The afternoon was an early set-off. The gig was at Ackworth so not too far away (and because it was a self booking rather than an agent booking it was great to be able to negotiate our own terms).

Arriving at the venue at 3, we had ’til 5 to soundcheck as it was a surprise party.

Amusingly, we could probably have arrived a whole hour later! The event didn’t really kick off until after half past six.

First set at 8 was a suited one. Blue suit. New shoes. 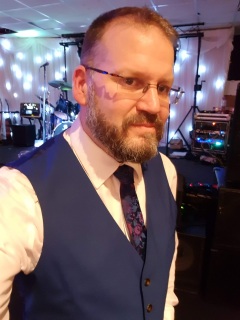 It was also a change of dry for us. Stay Together is now gone; replaced by Shallow (Lady Ga Ga). It was a good, well played set. Very enjoyable.

The second set was at half past nine. Blue shirt. PVC leather look trousers for this one. 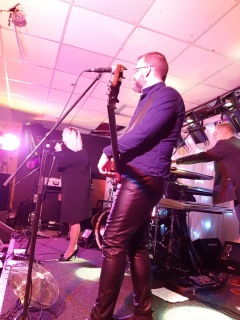 I did manage an onstage selfie for this one. Caught using my watch as a trigger.
Second set has now lost “Never Forget You” and gained the Pink Song – Cry.
Again, a great set, and with a 10:15 wrap up we could leave just after 11. I was home and in bed before midnight!
Today was my second Strangefish rehearsal. Again we booked the big room at Redwall Studios, Bury. A nice quiet journey over. I arrived to find Bob waiting outside. Unfortunately the owner Carl hadn’t turned up yet.
He wasn’t long though, and we started loading into what was the coldest rehearsal room on the planet.

Paul & Jo decided to hog the heater!
Of course I was manly and Yorkshire about it and set the trend for t-shirt only.

I won’t spoil too much for you, but we’ve now got 75% of the target material in a good state of performance; and we will soon choose a set for the May gig.
The rehearsal finished at just after 3:15.
Tonight. That’s fuelled by lemsip. Craig had a cold for Saturday’s gig. I truly hope it’s not going to become my child too.