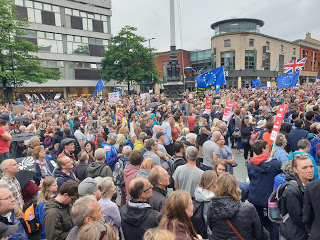 The UK is supposedly a Democracy. Allegedly we all have an equal voice, and we are all represented in Parliament by our elected MP’s who are put there by a system called “First Past the Post”. Now that bit is grossly unfair as it gives huge weight to large parties and yet a smaller party could conceivably get 25% of the overall vote and yet get no representation at all in Parliament.

But this isn’t a rant about PR and FPTP. This is about a cunt who has been placed into the seat of ultimate power in this country by the nature of the whim of just 100,000 people. The Conservative Party Membership. A group of mostly males, mostly over 55, mostly fairly right wing. So of course, they put Boris Johnson into the hot seat beause he’s very right wing.

Now Boris has come along after just a few weeks in the job and decided to Prorogue parliament; essentially shutting it down.

For the first time in my life this morning therefore, I protested. Along with a few thousand others.

Whilst I am a staunch remainer, I can understand that almost split vote could be taken in a number of ways – including Leave the EU with a deal, but forcing us nationally down the most hard right path and then shutting down parliament to prevent discussion is an affront to Democracy. Regardless of how this matter turns out, allowing this shutdown to happen is a dangerous precedent towards becoming a dictatorship and anyone who doesn’t understand this (most of whom support him because they’re quite frankly racists) really needs their head examining.

So I protested and I chanted. Any PM who presides over his throne whilst the public protest is living in dangerous times. I can only forsee it getting worse for him – I believe we are heading towards a general strike and that will financially cripple the country.