Two gigs this weekend just gone. Gateshead on Saturday and Middlesborough on Sunday.

Worse still, I’d booked a Spirit of Prog gig on Monday too! Oh bollocks!
Well Saturday was decent. Upstairs load. No smoke. But we were fine and we didn’t take the back trusses up.
They thought we were brilliant and the tiny strip of dance floor was absolutely packed, as was an aisle half way back down the venue. 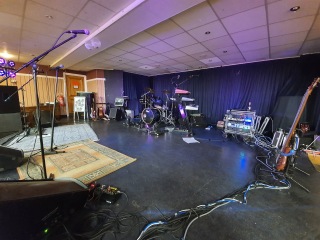 The stage, for the record, is one of the biggest we’ve had for quite a long time!
After arriving home at 2:30am, I got a few hours sleep, a bit of Minecraft, some Zelda (did I mention I’ve restarted the first “master quest” I aborted) and dinner, before leaving again to head to Middlesbrough.
A much easier load this time, and we put all the back trusses up, primed the haze machine, only to be told “no smoke”. Grrrr. Why couldn’t they put it on our contract?!!
Anyhow we soldiered on, and did two rather fine sets.

A much smaller stage tonight though, but still not a small stage by any means. See the hazer near the camera? Yeah that’s not getting used.
Have to say though, I looked splendid!

Arriving home at just before 2am I managed a few hours sleep before waking up and heading back to normality.
The final gig was Adam Wakeman and Damian Wilson at West Street Live. A spirit gig this time, so no load or playing for me – I just run the doors. Again though I looked splendid. My suit bag was in the back of the van so it was dead easy to just throw a white shirt in and wear some stage wear.

A much more normal home time – I was in bed by midnight.
It’s been fun, but being back to normal feels good too.