I’d also have the suit, but then I do have one in a very similar colour.

I know you’re not used to seeing me dressed up to the nines like that, but it does happen from time to time.

I suspect there are families up and down the country talking about things over dinner rather than having their faces lit up by phone screens.

Selfie taken using the front camera on my Note 8.

Bank holidays seem to have this strange ability to become two gig weekends, this was no exception.

The weather was beautiful though, we sat outside until after 7.

The stage backdrop was rather cool.

A rather beautiful moon graced the sky.

Sadly, the respect we received wasn’t good. Firstly we were told to arrive by 6, and yet we weren’t allowed to set up until after the football had finished on the main stage screen.

Then, setting up behind the children’s entertainment was not entirely safe.

Finally, not being allowed to soundcheck until 15 minutes before stage time wasn’t professional.

I didn’t enjoy the gig.

Sunday on the other hand was a total flip. A great club, well thought out, decent staff, easy load, and customers who dance!

The journey up was fuelled by coffee. A big coffee.

The stage looked great lit by a star cloth.

First set. They don’t dance during the first set.

A much better experience which totally undid all the bad feeling from the night before.

Friday and Saturday was a double gigger. It’s a while since we’ve done one of those.

Friday was a private function in Hessle… A wedding.

Saturday was a typical club gig, although this club was rather good. A nice easy load, great staff, nice and clean, and a half decent chippy across the road.

It even had a church next door judging by the half deflated balloon found in a puddle.

I should do this more often… I love wearing suits. However, today I didn’t have enough time to suit up, so it’s one from the archives.

I have the full suit for this one. It’s from Burton if you’re fancying the same outfit.

This blue one always used to be a bit tight. Not these days. It actually looks like it was made to order! 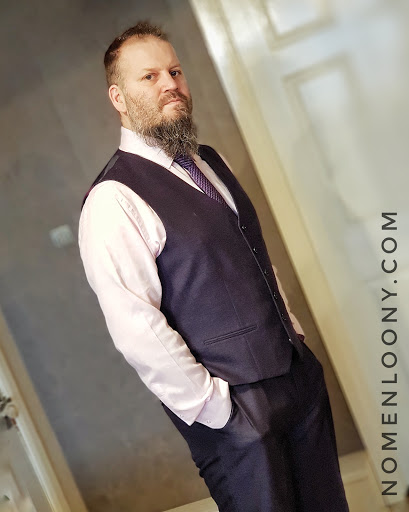 Most notable event though? Definitely Craig wearing a keyboard belt for a joke.