I suppose lockdown isn’t going to help that – I often walk into town to shop, and also we’re not doing any gigs. I’ve not weighed myself in a few months and I was quite surprised.

I didn’t feel fat, but I tried on one of my stagewear suits yesterday and it felt tight.

After a rather shocking 3.4kg of weight gain over Christmas, I’m back on the wagon to becoming a healthy weight again.

I’m now just 1.6kg up on my late November weight and as you can see from my picture my rather slimmer profile is back.

Amusingly every time I post a picture in this suit I get loads of questions about it, so I thought I’d answer them here.

If you have any more questions please feel free to ask in the comments.

Having looked through my photos and my timeline it appears to be the third time we’ve played Hatfield Main club. A leftover from the old Hatfield Main pit and now standing at the edge of a housing estate and with miles and miles of desolation and spoil heaps on the other side.

So I arrived at about twenty to six, only to have to tell Dennis off as he had single handedly unloaded the van without waiting for at least one of us to arrive. I went ballistic at him! Had he injured himself it would have been a health and safety nightmare!

We started building the stage between us, only to be followed shortly after by Jake; then pretty much immediataly after that Craig and Steve. We cracked on and built all the stage in under 40 minutes. We are really getting this polished now!

After finishing the build of the stage we had a through runs through the new Lady Antebellum cover. A fairly easy song for me but with some really weird off beat riffs which I’ll have to nail perfectly.

The club really started to fill up and we prepared for our first set at 8:30 (Hatfield is traditionally a three set venue).

I was in my green/navy checked suit for this one. The trousers are still feeling rather snug on the waist but my weight loss continues. Putting on 3kg at Christmas was a bad move!

The first set was played superbly! All the band locked in tight and we were edgy as hell. I feel somewhat sad that our old agent never actually gave us the support or gigs we needed as we are now a modern tight good looking and good sounding band – and we never fail to get the dance floor moving.

After what seemed like all too brief a half hour slot, finishing one song earlier than planned, we left the stage for just 30 minutes to refresh our drinks. I stayed suited – hardly seemed worthwhile changing – and then went and changed for the second set at 9:30.

Craig and I went for the Wiggles look for the second set. Him in red, me in pale blue.

Again, an incredibly powerful and we’ll played set and again cut short (the compere actually tried to cut us off just after Proud Mary but Craig had already started playing I found love).

The third set at 10:45 was played in front of probably 80% of the original crowd. That is another thing I notice these days – our crowd retention is very good. In the days before Belinda we’d lose about half the crowd after the last bingo game. Not any more.

The third set started with Justin Timberlake and took us through to Red Light, with the usual encores of I’m Alive and Sex on Fire.

By the time we had finished and loaded out it was about quarter past 12 and I was in bed before 1.

Amusingly, the new lights were criticised by someone. Because they “didn’t do enough”. It amused me, because the guy didn’t realise that we now have full scene control and we use them more as a band should, rather than previously when they used to run sound to light and we looked like a discotheque!

I have to say though, the UV wash we use to fill the stage pre gig looks really effective!

How your confidence in your appearance changes as you lose weight.
I honestly never thought I’d be able to wear white jeans again! 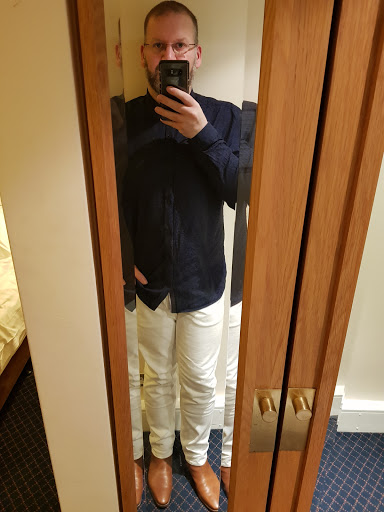 I’m hardly the perfect advocate, but you know when you see those photos online of before and after? Well these are mine.

It’s just over 12 months since I began my lifestyle change from an unhealthy fat potato with plantar fascitis & knee pain to become what you see on the right.

It was the photo shoot for the covers band on the left which horrified me. I looked disgusting! I was enormous and in an ill fitting suit which at the time I actually thought looked quite good.

Now I can shop at normal shops, delve into the middle of the rack, and when I see something really unusual like the PVC suit from ASOS I can actually buy it off the peg.

It’s not a diet that did this; it’s a lifestyle change. Less food, more exercise. For me it’s about the high fat foods. I now have them as occasional treats and only then as a small portion.

This photo was the shoot taken with my folk band a few weeks ago. The transformation is unbelievable!

I thought I’d answer some of the commonest questions and statements I get when I tell someone I’m vegetarian and have been over 20 years. I don’t eat meat, meat derivatives, nor do I appreciate cross-contamination of my food with meat and meat “juices”.

Gelatine is a big no no, as is Carmine (E120), and I also don’t drink wines or real ales clarified with Isinglass. I eat eggs, but I’m not a big consumer of milk – my favourite is almond milk because it just tastes so creamy.

Do you miss meat?

No. I never actually liked it when I did eat it. I didn’t like the taste or texture. I suppose you could say I’m a natural herbivore. When I was at family sunday dinners I used to get meat placed on my plate, and I often left it. The last meat I ate was when I was about 23 or 24. The entire time I’ve been in gigging bands I’ve never eaten it.

You must eat fish and chicken though?

No. They’re meat. Vegetarians who eat fish or chicken aren’t vegetarians, they’re carnivores. Anyone who doesn’t think fish or chicken is meat is sorely mislead, and perhaps needs to go back to school and do primary school level biology.

No not really. Plenty of restaurants cater very well for us. Some don’t, but I just avoid those. I’ve often seen cop-out restaurants where they “can’t guarantee against cross contamination”. Personally, I think that’s worse still! If they can’t avoid cross contamination between vegetarian food and non-vegetarian food, then what’s their record regarding cooked and raw meat?

Don’t you crave a bacon sandwich when you smell it cooking?

No. Not at all. I really don’t like meat. I never liked meat. I think these wild pigs would agree with me.

But you have Quorn. That’s pretend meat (often said with a smug look on their face).

You have chips. Those are pretend vegetables. I bet you even think they’re one of your five a day.

The vegetarian option is a nut cutlet.

How about show some imagination? Look. Even Quinoa can look nice, and I used to eat it before Waitrose decided to make it all posh.

I’m not a preachy vegetarian who thinks everyone should be vegetarian. I understand that humans, like some of the other greater apes, are omnivores. We have biological indicators that we were evolved to eat meat. My wife eats meat and I don’t condemn her for it. I’ll happily wear leather, but then I’ll also wear latex (and that’s from a tree!).

It can’t be healthy being vegetarian.

I’m 6ft 2, built like a brick shithouse, and I can lift a huge reel of steel wire armoured cable. Yes, of course it’s not healthy… I eat lots of cereals, I don’t take any vitamin supplements. I don’t need them. I have a good iron level (blood donors proves this).

Since September last year I’ve lost 25kg in weight, starting at a rather hefty 113kg with a 50″ chest and 42″ waist, and looking like this:

To a rather svelte 38″ waist, with this general appearance…

There have been no miracle diets. No stupid low carb roles, no starvation. Just a massive cut down on the amount of fat I’m eating, and a little reduction in sugars. I’m not watching my weight as such; I’m just not being a dick.

The problem I’ve now had however, is my stage suits – of which I own rather a lot! I’ve had to buy new ones. The grey/blue one above being a very cheap but very nice intermediate suit from Matalan.

Last week then, I headed out to Meadowhall to get a new suit to add to the one above.

The problem, of course, with Meadowhall is the glitz and the glam of the place get you, and then you become spend blind. Indeed, by the time i had done I had the two beautiful suits below and £270 less in the bank. Even with a big sale on! The darker suit was 50% off (but the material is absolutely gorgeous!).

Along with the new latex outfit I also bought a few weeks ago which are much smaller, I’ve now made a big commitment to not being fat again. I don’t think I can afford to! Suits and latex are very pricey.

I’m now a 36 to 38 waist (36 if the trousers are a regular fit, 38 if they are slim fit) and I’m getting quite comfortable with my size now. I think I’ll probably try and get down to 80kg and stay around there.

I’ve finally faced the fact that I now look quite Clownlike in 40″ and 42″ waist trousers.

Today I bought some black ones from Matalan. They’re a 38″ waist.