And yet I fancied a Greggs.

Yeah I know. Judge me. I know you’re going to.

Tasted good though and that’s what matters.

So lush on a Saturday morning. 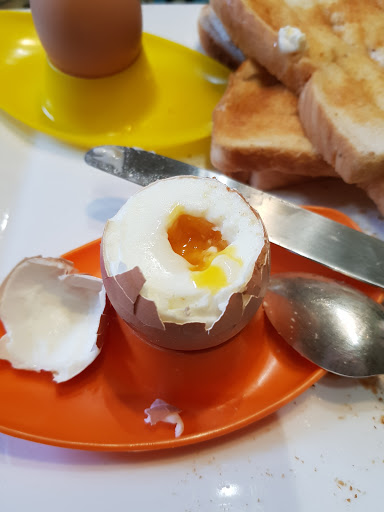 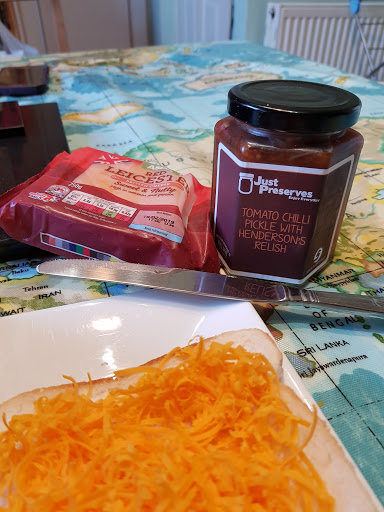 It might seem unusual to have a rock/pop band for an 80th Birthday, but the birthday boy has followed us for a number of years now so it seemed apt.

The hotel it was held at was a great place. Top end of Heckmondwike; a place called Healds Hall.

It was an early start as we had to be set up by 6. The load in was quite easy although I think the staff were very surprised when we kept loading more and more boxes into the place though.

Setup went well. It was the first full length gig for a while so we ran through a few of the songs we’d not played to just brush them up. Strangely, the last few gigs had all been around an hour performance time. We had to be silent at 6:45 as the special guest was arriving for a “meal in the restaurant” but he was then told the restaurant was very busy so they were in the back room…

The first set was a blue suit set. It felt a little tight on me and even though the scales show my weight hasn’t changed I need to keep an eye on that. It could be that my newest jeans all have stretch in them and I’m not used to a rigid waistband? After all the waistcoat and shirt felt fine.

In-between we had food. That, for me, wasn’t great. No detriment to the food, but as a vegetarian any mention of buffet or hot buffet fills me with dread. If it isn’t the mixed sandwiches cross contamination hell, or the “has it got meat in it” roulette with quiche, it’s the hot buffet “that’s your entire vegetarian choice” which contained aubergine. I don’t like aubergine.

The chips were nice though.

For the second set, after much threatening and teasing I wore the PVC suit. Dennis had been searching for one for himself and like many others who weren’t quick enough when I told them about it, he’d missed the boat. He then ribbed me about it onstage… Twat.

I combined with with the new shirt I got from River Island.

I suppose the one amusing thing was the stereotyping thing… Apparently shiny suits like that are usually worn by gay men.

I’ve got thick skin. I don’t actually give a toss.

I thought I’d answer some of the commonest questions and statements I get when I tell someone I’m vegetarian and have been over 20 years. I don’t eat meat, meat derivatives, nor do I appreciate cross-contamination of my food with meat and meat “juices”.

Gelatine is a big no no, as is Carmine (E120), and I also don’t drink wines or real ales clarified with Isinglass. I eat eggs, but I’m not a big consumer of milk – my favourite is almond milk because it just tastes so creamy.

Do you miss meat?

No. I never actually liked it when I did eat it. I didn’t like the taste or texture. I suppose you could say I’m a natural herbivore. When I was at family sunday dinners I used to get meat placed on my plate, and I often left it. The last meat I ate was when I was about 23 or 24. The entire time I’ve been in gigging bands I’ve never eaten it.

You must eat fish and chicken though?

No. They’re meat. Vegetarians who eat fish or chicken aren’t vegetarians, they’re carnivores. Anyone who doesn’t think fish or chicken is meat is sorely mislead, and perhaps needs to go back to school and do primary school level biology.

No not really. Plenty of restaurants cater very well for us. Some don’t, but I just avoid those. I’ve often seen cop-out restaurants where they “can’t guarantee against cross contamination”. Personally, I think that’s worse still! If they can’t avoid cross contamination between vegetarian food and non-vegetarian food, then what’s their record regarding cooked and raw meat?

Don’t you crave a bacon sandwich when you smell it cooking?

No. Not at all. I really don’t like meat. I never liked meat. I think these wild pigs would agree with me.

But you have Quorn. That’s pretend meat (often said with a smug look on their face).

You have chips. Those are pretend vegetables. I bet you even think they’re one of your five a day.

The vegetarian option is a nut cutlet.

How about show some imagination? Look. Even Quinoa can look nice, and I used to eat it before Waitrose decided to make it all posh.

I’m not a preachy vegetarian who thinks everyone should be vegetarian. I understand that humans, like some of the other greater apes, are omnivores. We have biological indicators that we were evolved to eat meat. My wife eats meat and I don’t condemn her for it. I’ll happily wear leather, but then I’ll also wear latex (and that’s from a tree!).

It can’t be healthy being vegetarian.

I’m 6ft 2, built like a brick shithouse, and I can lift a huge reel of steel wire armoured cable. Yes, of course it’s not healthy… I eat lots of cereals, I don’t take any vitamin supplements. I don’t need them. I have a good iron level (blood donors proves this).

Mixing various sandwiches on a platter so you get the visually appealing mix of colour is an absolute delight to see, but every vegetarian, every Jew or Muslim, and every allergy sufferer just steadily shakes their head and dives into their bag for the emergency muesli bar.

I’m vegetarian. I don’t eat meat. I don’t really want my sandwiches to be bathed in meat sweat and juices. I don’t want cross contamination.

I have Muslim and Jewish friends. Pork to them is unclean. Random meat of indeterminate origin is not their bag. They usually take the vegetarian route where the meat is unclear, but when it’s all touched each other it’s not really fair.

My wife, well she can’t eat sweetcorn. A hint of it sets off a bad reaction. She doesn’t want to go anywhere near the tuna and sweetcorn. That would be very bad.

Even the supermarkets do it, although they do now seem to offer a vegetarian version (some do, at least).

What’s wrong with a plate of each type of sandwich? Seriously? It’s not that difficult to do… You could even do us a favour and write on the edge of the plate in Sharpie what the sandwiches are. Takes the guesswork out of the meats.

As for the samoas and “random filling rolls”, well they’re just a minefield! It could be meaty… It could be people meat… You just don’t know.

At least quiche is a little easier to guess!

Until something changes, the tracker bars will remain on standby.

Will a Mini Roll do?

Since September last year I’ve lost 25kg in weight, starting at a rather hefty 113kg with a 50″ chest and 42″ waist, and looking like this:

To a rather svelte 38″ waist, with this general appearance…

There have been no miracle diets. No stupid low carb roles, no starvation. Just a massive cut down on the amount of fat I’m eating, and a little reduction in sugars. I’m not watching my weight as such; I’m just not being a dick.

The problem I’ve now had however, is my stage suits – of which I own rather a lot! I’ve had to buy new ones. The grey/blue one above being a very cheap but very nice intermediate suit from Matalan.

Last week then, I headed out to Meadowhall to get a new suit to add to the one above.

The problem, of course, with Meadowhall is the glitz and the glam of the place get you, and then you become spend blind. Indeed, by the time i had done I had the two beautiful suits below and £270 less in the bank. Even with a big sale on! The darker suit was 50% off (but the material is absolutely gorgeous!).

Along with the new latex outfit I also bought a few weeks ago which are much smaller, I’ve now made a big commitment to not being fat again. I don’t think I can afford to! Suits and latex are very pricey.

I’m now a 36 to 38 waist (36 if the trousers are a regular fit, 38 if they are slim fit) and I’m getting quite comfortable with my size now. I think I’ll probably try and get down to 80kg and stay around there.