We have had a rather snowy winter this year. We have often gone for 2 years with no snow but this year we’ve had a few bouts of heavy snow which have settled.

This morning I started work late. Too hazardous at first to take the van out, so I went to mum’s in the Jag (it is AWD after all) and walked her dogs.

I’d say we had about 2″ of snow in total although it’s now turned to rain.

Years ago I used to carry a bag with me containing laptops, battery bricks, cables, in fact loads of stuff! They weighed a tonne but it was what I needed. Nowadays, however, my “bag” is variable depending on what I intend to do. These are the items that go in my full size travel bag; but obviously I do change from day to day and sometimes by bag read pockets.

1. Top left – T-Core power brick. It’s a decent two charge brick with USB C support. I also have larger bricks for weekends but this one is a good daytrip one.

2. Galaxy Note 20 Ultra phone – the powerhouse of my setup. The reason I don’t carry a laptop everywhere.

3. Cheerdots “Cheerpod” (with it’s case and USB C cable) – A Kickstarter I backed for an air mouse/desk mouse combination. It turned out to be a great little device and it can replace both a presentation controller and a mouse; plus it’s a USB C charger.

4. Samsung Galaxy Buds Live (the beans) – I have very small ear canals and these fit great. I can wear them for a few hours without even realising I’ve got them in. Plus because they’re not “in the ear canal” I don’t get the perpetual ear infections I get with regular in ears.

It has a 4500 mAh battery bank built in which is a great saviour too.

Finally, the thing I get asked most about is the keyboard.

6. LG Rolly 2 – a roll up keyboard. Of the portable keyboards I own this one is the best to type on. It’s great on a flat surface. The length of it can be a bit off-putting as it is about a foot long rolled up, but it fits inside my coat pocket and I don’t notice it’s there.

It even fits in a jeans pocket… Sort of. But you might not want to sit down. These are some of my looser fit leather jeans and the pockets are quite big. I dread to try this with my slim fit latest pair.

So that’s the contents of my bag. Tiny isn’t it! I often keep it in a retro Gameboy Advance case although the keyboard is the issue here – I do a have different folding keyboard that fits in there but I’ve never found one as nice to type on.

Perhaps in a few years it will change again, but for now it’s been stable for quite a long time.

I’m loving my new tattoo. I can’t wait to get it finished now. Under my arm is going to have a few Sheikah words.

It looks great with the leather. I just need to get the zip mended on these trousers as it no longer locks up.

Today is the first day I’ve really felt it was cold enough to wear the leather jeans again since summer.

After the recent heatwave it’s delightful to grab out my leather jeans again and put them on.

The reason, though, is no obvious.

My Pityriasis Rosea is still bubbling on and all the sites have now gone red and itchy. The last couple of days have been spectacularly bad with it. The leather is unfinished and unlined below the knee so it’s really soft against the skin.

I did try jeans originally, but I found myself wanting to scratch my legs off.

I have to say I’m running out of trousers that fit me though. These used to be seriously tight. They’re now baggy as hell.

I’ve ordered some new dress trousers, but I think I might be adding a pair of jeans onto the list too.

After my recent latex 101 article (which seems to be popular!) I thought I’d now do a “coming out shiny” article off the back of it as there are a lot of people out there who really really want to wear shiny clothing, be it leather, latex, PVC, but they’re absolutely terrified of what their friends and family might think.

Let’s get started with my story…

I was rather young when I first got leather trousers. I’d started working, got my own income, and even though I had wanted some all through my childhood my parents, rather wisely, had told me no. I look back now and agree with them – I was growing very fast and leather is expensive.

It all started at Laser Quest. A guy came in (looking rather cool for the time in full leather, bandana, cowboy boots). He was with a female who I thought might be his girlfriend and he certainly acted straight – being pretty much straight myself I felt a little lift!

My only previous experiences with leather, and trousers in particular, had been associated with gay culture and gay imagery; motorbikes; and rock bands. Yes I’d had a bike, but a 50cc FS1E might look a bit silly being straddled by a fully leathered up dude, and at that point my bass playing was strictly bedroom only.

This guy, though (I even remember his name was Marc) was a different look for me and I liked it. I felt slightly jealous of his confidence as at that time I was quite meek and quiet.

I plucked up courage, went and spoke to him, said “nice trousers, where from?” and I’m not sure whether he thought I was a bit weird or not, but he told me they were from Meadowhall – Street Leathers to be precise.

It was 6pm… Meadowhall closed at 8… I could get down there and get some and be like Marc in less than two hours!

So it happened. I went down to Meadowhall, paid a ridiculously high price for a pair of very average quality leather jeans; went home; and hid them in the wardrobe. Only to wear them when I was in the house on my own.

The first time I wore them was…

In 1996 I started a degree with the Open University. The first course (S101) had a summer school which was a week at Keele University.

I was learning bass and getting much better at it, I was wanting to join bands, but my image really didn’t say “Musician”. I looked a bit geeky!

I went away to summer school with a bit of stubble and blue jeans on, arrived at summer school, and the first evening after lectures I changed my image. I shaved my first goatee beard, put on the leather trousers that had been hiding in the wardrobe, gelled up my flat hair into some cool spikes, and gave myself an image makeover!

Do you know what happened?

And that, my friends, is the biggest step to going out in leather for the first time.

They’re not out there, they aren’t weird, and when you are seen for the first time in your new leather jeans nobody will actually care!

I thought I’d have people making village people jokes but nope. I didn’t end up running back to the room crying. I just sat in the union bar, talked with my fellow science group, and nobody said a thing about them.

Breaking them in to friends

Family and friends are the next big hurdle.

My next step was more distant friends (my prog rock music community).

I went to see a band in Bury. Traveled in blue jeans, changed in the car into leather jeans, went to see the band. Again… Nobody noticed. Nobody cared. My apprehension was going very rapidly.

So… On to closer friends. One of my biggest worries.

It was Christmas. We used to go down Swinton for a drink just before Christmas. I’ve never really done the alcohol thing though! I did it again. Headed out, changed trousers in the car, and looked rather nice in my fluffy sweater, leather jeans, black leather boots. When my friends saw me nobody mentioned the trousers… Until later 😲

We went to one of their houses after. One of the group, Mark, commented on my leather jeans – saying if he’d have known I was going to wear mine he’d have worn his! (Ironically, the year after he did wear his but I didn’t wear mine!).

All in all, positive responses all round and every single anxiety I had defused.

I also wore them to meet friends in Cornwall in the 90’s. It’s the first photo I have of me in them. I look very very different!

This was the most difficult of the lot for me, and it did involve a white lie… But it did coincide with me joining bands.

Rather than saying I’d bought them from Meadowhall a couple of years previous I said I’d only bought them there and then. They were to be stage wear, but actually, they ended up being regular wardrobe clothing.

First time my mum saw me in them she said “cool” and then bought some herself. She even wore them to one of my gigs!

Since then leather has become more and more a part of my wardrobe.

I’m now doing the same process with latex. I’m at the stage of close friends with that… Let’s see how that goes eh? After all latex is a bit more “out there”

Whilst I don’t actually trust BMI as a way of indicating health, I do understand that it can be used carefully as a guide.

Today I weighed myself and at 86.8kg I now fit within the weight range of normal (although I’m still at the top end of the range).

I’m now fitting into 36″ waist trousers, including these rather amazing leather ones which look rather stunning if slightly dapper mixed in with this beautiful waistcoat.

…although this would be more my general office wear.

Jake, FTM’s sound guy is now in Ethryll. A great celebration as we’ve been missing something in the band and I think he’ll add it.

Also, 38″ waist leather jeans – and they fit me again. 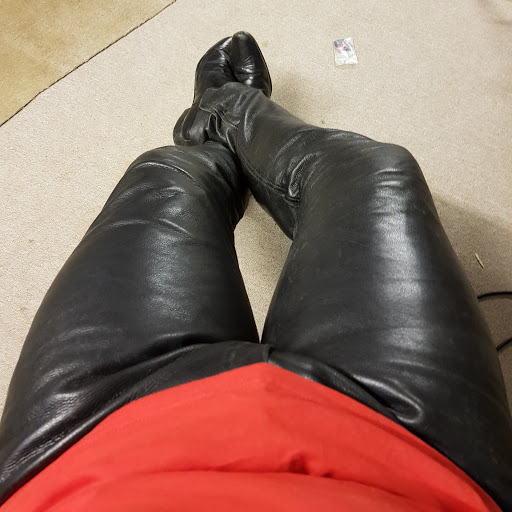 I love Grand Designs. Not just because of the innovative ideas some of the couples come up with, but also with a lot of them for exhibiting sheer stupidity at the scope of the project they tackle, and yet the lack of money they have spare to allow for contingency planning.

Also, I think Kevin McCloud is a great presenter with an element of level headedness about him when they are up in cloud cuckoo land.

Plus he once wore leather trousers! Season 1, Episode 1; the very first ever scene! But I’ve never seen him in them since.

Sadly our narrow minded idiotic social networks criticised him for then, because they’re, well, populated by idiots.

Our second gig here. This time we hada little more control over the gear and the sound was a little better.

Sadly the West Street Ale House is set to close as the building is being demolished.