I sparked controversy a couple of days ago. I’ve had some pretty opinionated comments on Instagram from people who have since been removed from my circles. Why? I hear you ask?

Well consider this photo. I’m out on my Fiido enjoying a ride. I’ve got the trailer hitched on the back and I’ve just been shopping. You’ll notice I’m wearing leather trousers. Leather chinos to be precise (not jeans, and if you want to stay friends with me you’ll learn to differentiate between chinos, jeans and formal trousers! 😉)

Guys think I shouldn’t be riding a bike in “expensive leather trousers”.

Fellas… They were £15 off eBay. Most of my leather trousers/jeans come from eBay and cost under £20.

Now let me put this in perspective; I have a couple of pairs of Levi 501’s. A pair of 501’s is currently around £90. You don’t say a thing when I wear unwipeable non water-resistant £90 jeans when cycling but you moan because I wear a pair of fifteen quid leather trousers?

Seriously guys, stop standing in front of the mirror getting off and sharing bedroom photos on Instagram and get the fucking things worn in your life!

I’ve been wearing leather trousers in my daily life for about thirty years now and I won’t be changing any time soon!

I now have some leather shirts! They were ordered in error by a contact and couldn’t be returned, so they have ended up with me.

There’s also a green one but I’m finding it difficult to photograph. It throws the white balance out on my camera.

I must say I’m rather pleased!

Apparently I’m “weird” because I enjoy wearing shiny clothes and I sometimes go to fetish clubs. This was the opinion of someone who I would describe as “dull and uninteresting”.

I’m not going to make out that what I enjoy is in any way normal to most people, but FFS we are all different and we all have different things we enjoy which someone else will think it’s a bit strange.

Don’t knock the train spotters when you see them stood on the end of Doncaster platform. It’s their little bit of weird. Live and let live!

A visit to friends today. I decided to finally take the plunge and wear my three piece leather suit for the first time out and in its entirety.

I paired it with my iridescent purple shirt and a very handsome purple floral tie. I have to say purple is a colour I do really like!
My tea was served in a very “apt” mug it has to be said… Mini me approves!

In case you want to see the outfit in the whole, I grabbed a picture.

Although it’s an absolutely terrible film, this guy was the one who made me realise that three piece suits could be leather.

I saw him in it when he was in the audience at a celebrity comedy event – the host commented on it and he said it was costume from “Spice World – The Movie”.

Of course I admired him in it very much and decided that I would own such an item.

Well it took me a few years, but eventually I did “the look”.

I’m not quite sure who suits it better though?

Yesterday afternoon I got in from my day’s work and felt like putting a suit on.

Leather was the order of the day.

After the recent heatwave it’s delightful to grab out my leather jeans again and put them on.

The reason, though, is no obvious.

My Pityriasis Rosea is still bubbling on and all the sites have now gone red and itchy. The last couple of days have been spectacularly bad with it. The leather is unfinished and unlined below the knee so it’s really soft against the skin.

I did try jeans originally, but I found myself wanting to scratch my legs off.

I have to say I’m running out of trousers that fit me though. These used to be seriously tight. They’re now baggy as hell.

I’ve ordered some new dress trousers, but I think I might be adding a pair of jeans onto the list too.

After my recent latex 101 article (which seems to be popular!) I thought I’d now do a “coming out shiny” article off the back of it as there are a lot of people out there who really really want to wear shiny clothing, be it leather, latex, PVC, but they’re absolutely terrified of what their friends and family might think.

Let’s get started with my story…

I was rather young when I first got leather trousers. I’d started working, got my own income, and even though I had wanted some all through my childhood my parents, rather wisely, had told me no. I look back now and agree with them – I was growing very fast and leather is expensive.

It all started at Laser Quest. A guy came in (looking rather cool for the time in full leather, bandana, cowboy boots). He was with a female who I thought might be his girlfriend and he certainly acted straight – being pretty much straight myself I felt a little lift!

My only previous experiences with leather, and trousers in particular, had been associated with gay culture and gay imagery; motorbikes; and rock bands. Yes I’d had a bike, but a 50cc FS1E might look a bit silly being straddled by a fully leathered up dude, and at that point my bass playing was strictly bedroom only.

This guy, though (I even remember his name was Marc) was a different look for me and I liked it. I felt slightly jealous of his confidence as at that time I was quite meek and quiet.

I plucked up courage, went and spoke to him, said “nice trousers, where from?” and I’m not sure whether he thought I was a bit weird or not, but he told me they were from Meadowhall – Street Leathers to be precise.

It was 6pm… Meadowhall closed at 8… I could get down there and get some and be like Marc in less than two hours!

So it happened. I went down to Meadowhall, paid a ridiculously high price for a pair of very average quality leather jeans; went home; and hid them in the wardrobe. Only to wear them when I was in the house on my own.

The first time I wore them was…

In 1996 I started a degree with the Open University. The first course (S101) had a summer school which was a week at Keele University.

I was learning bass and getting much better at it, I was wanting to join bands, but my image really didn’t say “Musician”. I looked a bit geeky!

I went away to summer school with a bit of stubble and blue jeans on, arrived at summer school, and the first evening after lectures I changed my image. I shaved my first goatee beard, put on the leather trousers that had been hiding in the wardrobe, gelled up my flat hair into some cool spikes, and gave myself an image makeover!

Do you know what happened?

And that, my friends, is the biggest step to going out in leather for the first time.

They’re not out there, they aren’t weird, and when you are seen for the first time in your new leather jeans nobody will actually care!

I thought I’d have people making village people jokes but nope. I didn’t end up running back to the room crying. I just sat in the union bar, talked with my fellow science group, and nobody said a thing about them.

Breaking them in to friends

Family and friends are the next big hurdle.

My next step was more distant friends (my prog rock music community).

I went to see a band in Bury. Traveled in blue jeans, changed in the car into leather jeans, went to see the band. Again… Nobody noticed. Nobody cared. My apprehension was going very rapidly.

So… On to closer friends. One of my biggest worries.

It was Christmas. We used to go down Swinton for a drink just before Christmas. I’ve never really done the alcohol thing though! I did it again. Headed out, changed trousers in the car, and looked rather nice in my fluffy sweater, leather jeans, black leather boots. When my friends saw me nobody mentioned the trousers… Until later 😲

We went to one of their houses after. One of the group, Mark, commented on my leather jeans – saying if he’d have known I was going to wear mine he’d have worn his! (Ironically, the year after he did wear his but I didn’t wear mine!).

All in all, positive responses all round and every single anxiety I had defused.

I also wore them to meet friends in Cornwall in the 90’s. It’s the first photo I have of me in them. I look very very different!

This was the most difficult of the lot for me, and it did involve a white lie… But it did coincide with me joining bands.

Rather than saying I’d bought them from Meadowhall a couple of years previous I said I’d only bought them there and then. They were to be stage wear, but actually, they ended up being regular wardrobe clothing.

First time my mum saw me in them she said “cool” and then bought some herself. She even wore them to one of my gigs!

Since then leather has become more and more a part of my wardrobe.

I’m now doing the same process with latex. I’m at the stage of close friends with that… Let’s see how that goes eh? After all latex is a bit more “out there”

The old pleated front leather trousers are now in the archive wardrobe. These are looking great on me! 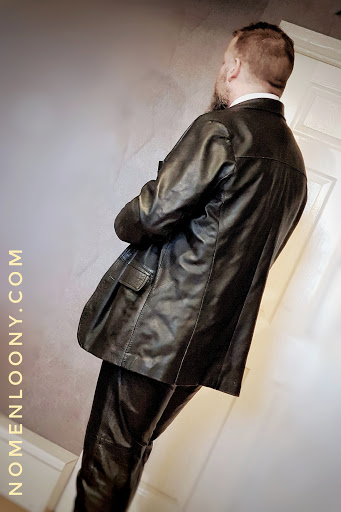 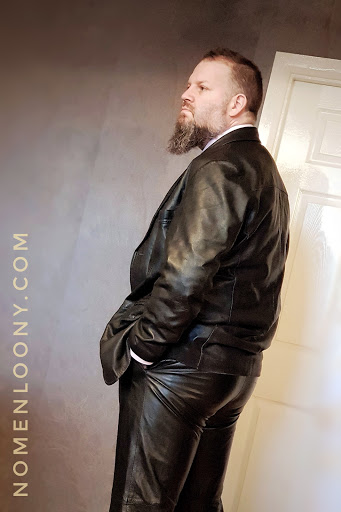