You may know him online as Alternalife or Rockinrubber but I know him by his real name. We met up yesterday and he not only joined me for my camping trip but he also brought up some of his latex gear. I even got to try one item on!

It was a bit tight as you can see, but I’ve got to say even though this kind of stuff isn’t really my thing, I actually loved how I looked in it.

My fetlife alter ego is “Metalatex” because I like both metal music and latex. Recently I’ve started to go for more an aging metalhead look – which I really like – finding out some old leathers (lace up for that authentic metal look) and a Spiral Direct sleeveless shirt (much helped by my rather splendid Legend of Zelda tattoo; which is a rather cool way of getting a wolf tattoo without looking like a shiter).

Today I thought, I wonder what it would look like if I substituted latex for the leather. The answer is cool (well if you like latex anyway) although I have to say I don’t think I’d wear this out. But then you never know…

I did a couple of versions of the one I thought would look like a really good avatar.

Desaturated and with my kris.blog branding (I prefer the nomenloony brand for fetish sites).

I must say I’m really liking having hair again, but it needs taming. Perhaps when lockdown ends – but I’m keeping the length on top. The back of my hair gets ridiculously thick!

I may be in my late 40’s, but I still love modern power metal and hard rock music. I still dress for the scene and I can certainly out-Mosh many younger people at the alternative nightclub!

The shirt is by Spiral Direct, the jeans by Cathouse Clothing (they’re latex). Tattoo by Inkd Industries.

Dentist: “Are you allergic to latex”

It’s quite liberating when you’re in a hotel, many many miles away – where you are incredibly unlikely to be recognised.

It gave me an opportunity to dress up a little – latex jeans mixed in with my Alton Towers “Wicker Man” t-shirt.

A lady at the next table commented on my trousers. Her partner (husband?) then made a comment and asked what they were made of. When I told them they were latex they were both taken quite aback and the conversation continued for another couple of minutes – although I felt like it was being polite rather than a genuine interest.

It’s so much cooler today. I finally got to wear some latex for the first time in ages!

Over the years people have worked out I’ve got a bit of a thing for shiny clothes, be they leather or PVC.

Well I’ve also got a decent latex collection too. All very classy. Nothing sordid or crass.

Here’s my latex jeans and T-shirt. All from Cathouse Clothing.

Sorry about the branding and watermarking, but I’m a bit miffed that someone keeps stealing my images and sharing them on Pinterest without linking them back here.
I’m trying to drive traffic here! Those AdSense ads don’t generate revenue themselves.

Shocked? Don’t be. It’s not that uncommon…

4th March 201826th February 2019 ~ Kris ~ Leave a comment
There are certain perils and pitfalls about going out to gig in latex jeans. I’ve done it a few times (indeed I’ve played on stage in leather and pvc, but never latex). My day yesterday was a latex day… Rewind a few days…

Being forgetful me, I had totally forgotten that I had absolutely no latex shine left at all. Not a jot. My last bottle of vivishine was looking quite bleak and I don’t think hitting it with a hammer would squeeze any more out of it.

Sadly, my only latex which is suitable for wearing out without some sort of shine is chlorinated, and since I’ve lost weight it looks like I’ve tied bin liners around my legs.

After the usual Saturday morning duties were done and dispensed with I decided I had to go to the shops; this would also include a trip to the biggest sex shop in the UK so I’m told (not too far from us!). I know they’re a sex shop rather than a fetish suppliers, although I know they do the aerosol based silicon “rubbashine” stuff. It’s ok in an emergency, but better as a shine top-up.

That’s the point at which I found out they now do their own generic latex shine (with a rather smutty name!). Better still; 4 for the price of 3!

Rather than just try them, and knowing my latex jeans were down in my gig wardrobe at work (I store my stagewear in my unit due to home wardrobe size constraints) I called by there and gave them a shine, before putting them on.

Have to say, looking good!

So, that not much after I headed up to the gig; complete with one of the new bottles and a duster in a small bag for “topping up”.

I arrived at the venue. Topped up my shine as I got out of the car (leather seats don’t go well with latex so I tend to sit on a towel or just my coat to avoid the embarrassing sound of it pulling away)

Parking the car and walking down to the venue was a rather cold experience. Snow on the ground and latex jeans with the insulating properties of tissue paper after all!

They shone well in the street lights though!

I was in them for about 6 hours in total. When I first started wearing latex a few years ago I couldn’t wear it for very long. Now I think my body is accustomed to it and I just wear it like normal fabric.

The gig was great. People’s responses to my jeans were quite surprising too. Most people didn’t say a thing (although I detected a few people wanted to say something but didn’t quite know how to take it).

Some people thought they were “shiny plastic”. I corrected them of course.

In all, I felt great and looked pretty damned awesome. Even my beard stayed in order!

But you say perils, I hear you ask.

Well unlike leather and pvc, latex needs “care” whilst you’re out and about. The silicon polish that gives you the shine eventually wears off, so the occasional freshen up trip to the toilets is required so you can give the shine a top up.

This in itself can be a hazard as the silicon can be very slippery if you get it on anything. You have to be careful with the floors of the toilets as you don’t want the next customer slipping up.

Also, generally at gigs, the toilets get quite grim anyway so it’s not a nice place to be!

These, on the other hand, weren’t bad…

I did the obligatory mirror selfie whilst nobody else was in there. Bit weird otherwise…

The other problem with wearing latex, of course, is the stroke factor. You do get a lot of people curious what it is and wanting a touch. Then again… It does look amazing!

The gig was great, and to be honest when I got home I wasn’t actually in a rush to take them off. I’m definitely accustomed to latex these days.

Weight loss is making these latex jeans a much better fit these days. 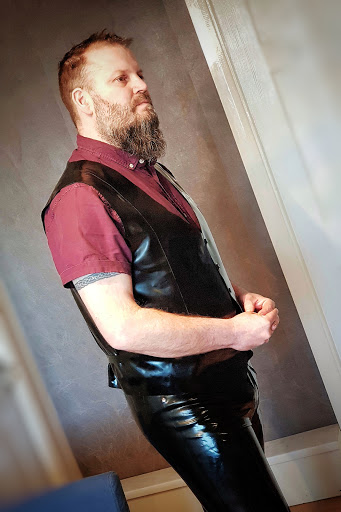