Even in these hard times we can all be assured that December will be a little change. I’ve noticed everyone is taking extra effort with their decorations this year to try and create a little Christmas spirit. Yes it’s going to be odd with the limited travel and the lack of parties (although I suspect some people will still have them anyway), and no gig on New Year’s Eve is certainly going to be strange.

I’ve really been quite well prepared this year, and in general we are very well prepared for the future. An impeding hard Brexit is not leaving me with an easy feeling as I am absolutely sure there will be trouble ahead if we do. We need a deal with the EU. A bad deal is better than no deal, but try telling that to the fuckwits in Parliament.

But I get into politics, and you don’t come here to read about politics.

Note to self : you have tried Android Wear and you’ve tried Garmin and you didn’t like either.  Stick with Samsung.

The latest one is pretty much an iteration of the previous one but with extra features and slightly less weight, although I have had to sideload some of the features as they are not yet approved for use in Europe or the UK, and our regulators are still focused on COVID-19 vaccines (the first of which we already have now).

The first feature I gained is ECG. A very good tool for health monitoring, especially as I near 50. I’m already older than my dad was when he had his heart attack and keeping an eye on the electrical activity in my heart can be a good thing (although it does help if you can read an ECG rather than just relying on the software).

Secondly I gain a blood pressure monitor. Now this is definitely useful, as someone who can’t actually remember the last time I had my blood pressure taken it is a good idea to monitor it.

My readings show it is slightly elevated, but not a concern provided I keep an eye on it and make sure it doesn’t rise too much. Anything over 140/90 is considered high blood pressure.

I suppose the thing raising my blood pressure is this…

Yeah I finally got my PVC tie! A friend on Instagram pointed me at them. It’s from a company in the Netherlands called Mr Riegillo. ( https://mr-riegillio.com/ )

I did have to give it a covering of latex polish before I could actually tie it though. It really doesn’t slide, even though PVC looks as smooth as hell it does actually grab against itself.

After a rather shocking 3.4kg of weight gain over Christmas, I’m back on the wagon to becoming a healthy weight again.

I’m now just 1.6kg up on my late November weight and as you can see from my picture my rather slimmer profile is back.

Amusingly every time I post a picture in this suit I get loads of questions about it, so I thought I’d answer them here.

If you have any more questions please feel free to ask in the comments.

Happy international Fetish day guys and gals! Hope you got to shine (if that’s your thing…)

I attempted to catch a pure white background, and for the most part succeeded, however, I edited it up a little more in Snapseed and removed some artefacts.
14th July 2019 ~ Kris ~ Leave a comment

I was playing around with the new stage lights and I thought I’d see how they worked with my PVC suit.

I think we can all agree the results are awesome. 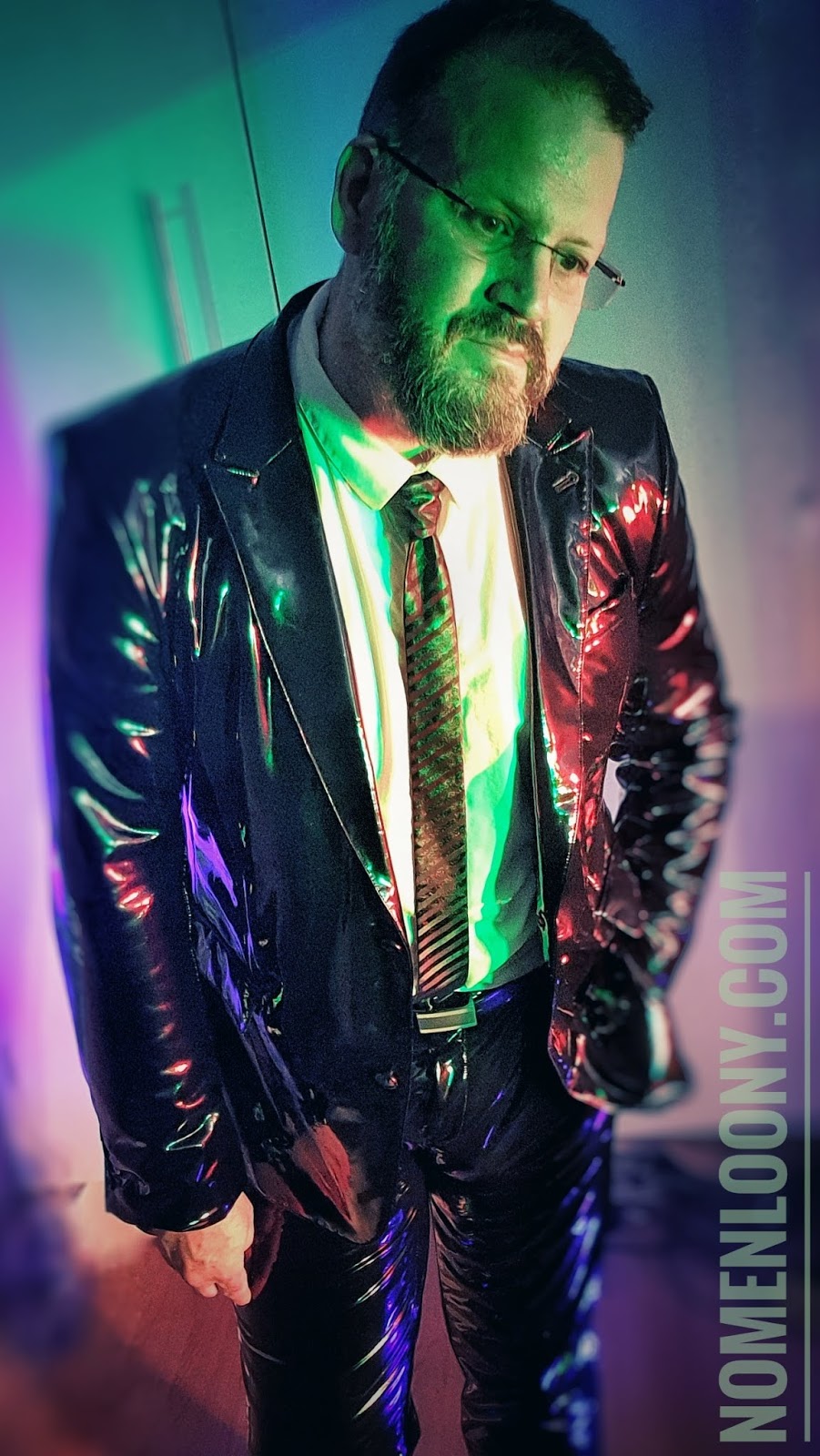 So it was Jake’s 27th on Saturday. He decided he wanted to go around Doncaster.

He also told me he was going to wear his new rose gold pvc jeans (ASOS, pretty much sold out now).

Not wanting to overshadow him I decided to go fairly vanilla – just a pair of jeans and an Oxford shirt. But when I jokingly said that I was thinking of wearing the PVC suit he said “mint!”.

Ok, I followed his intention…

It wasn’t too warm a day so I thought perhaps I could get away with it for a while.

We arrived in Doncaster and immediately I was a talking point. Loads of people commented on the amazing suit. Jake looked stunning in his outfit. Very metrosexual – quite flamboyant. 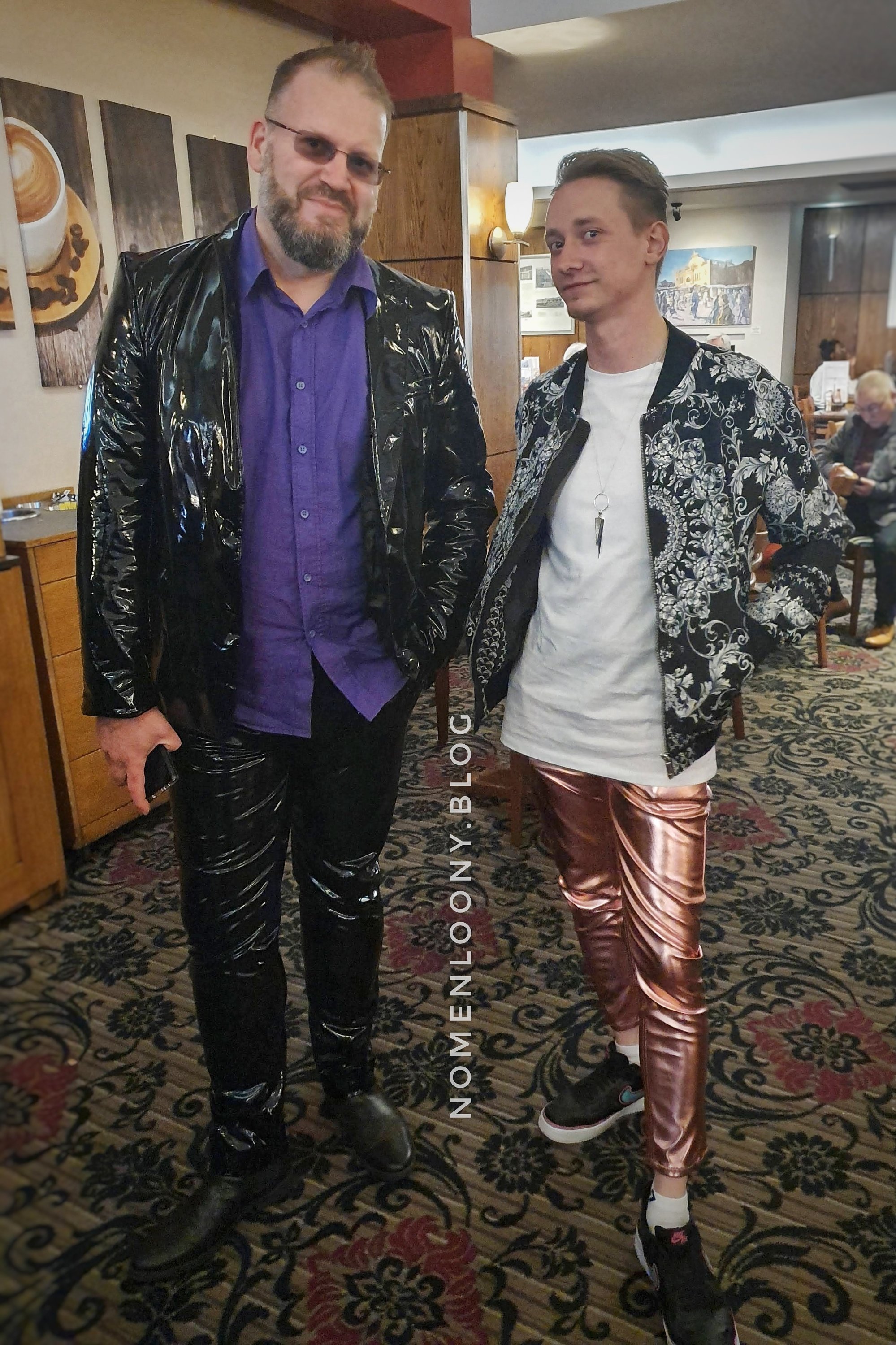 I was driving though so the only drinks I could have were Mocktails and low alcohol beers.

The night went as follows:

The Gatehouse -> The Wool Market -> The Gin Rooms -> The Red Lion

We left after the lion as my pvc suit was getting a bit clammy. It’s a great looking suit but it’s not really practical to wear on a day in day out basis.

Although it’s an absolutely terrible film, this guy was the one who made me realise that three piece suits could be leather. 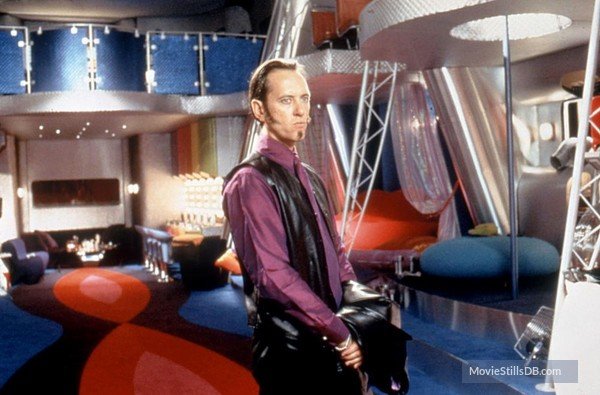 I saw him in it when he was in the audience at a celebrity comedy event – the host commented on it and he said it was costume from “Spice World – The Movie”.

Of course I admired him in it very much and decided that I would own such an item.

Well it took me a few years, but eventually I did “the look”.

I’m not quite sure who suits it better though?

It was my mate’s 50th yesterday. He wanted to go and see Rocky Horrors and so we took him to the Lyceum to see the touring production.

He was ferried in style…

Apparently he’d never been in a Jag before, so when he asked to sit in the drivers seat I obliged if course! 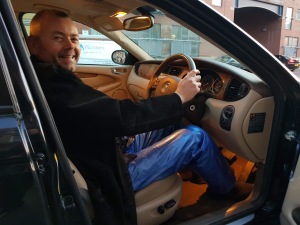 His chosen meal was tapas (is that pronounced tapas or tapas? I’m never quite sure…). I’ve never had it before, and I must say I rather enjoyed it. Hannah wasn’t quite as big a fan though – just because tapas isn’t really her thing. 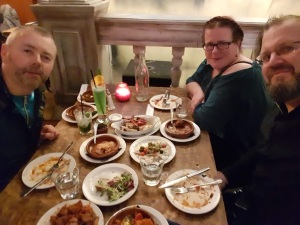 The comments on our outfits were great! Wayne in pvc jeans, latex top and mesh shirt; me in the ASOS PVC suit… Truly magnificent as we walked across Sheffield.
Upon arriving at the Lyceum, of course, you feel totally normal as you’re surrounded by loads of men in drag, white y-fronts, gold hot pants, and other such outfits from the musical. 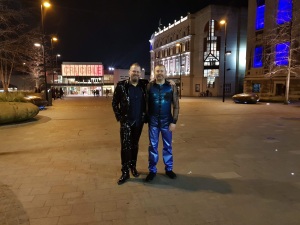 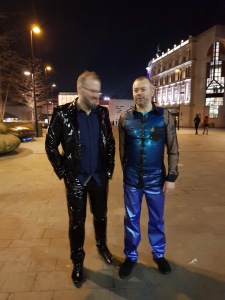 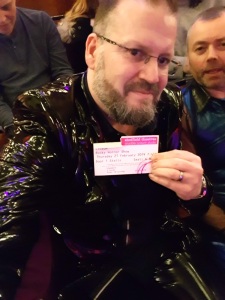 The performance was very good, although I have to say I wasn’t over impressed with Eddie/Dr Scott as a performer. He was good, but just not great.
Philip Franks was the narrator this time. Very very good, and very responsive to the heckles. Some great comebacks!
The funniest comment about the PVC suit did come during the interval from another theatregoer – “I just want to polish you, but then you’ve got ice cream and I’m lactose intolerant so it’s all wrong”.
Hannah said she’d spread ice cream all over the sirs just to keep her off me!
The performance finished about quarter to ten which meant we were actually home fairly early. Which was good. The PVC suit needed peeling off!
15th February 201926th February 2019 ~ Kris ~ Leave a comment

I felt like dressing in my pvc suit today. It’s out wedding anniversary and we’re heading out. Perfect going out wear! 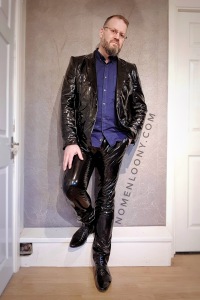