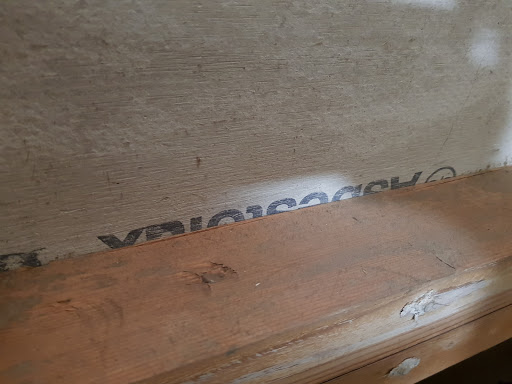 I found this stuff on a site today. It’s about 14% brown asbestos.
The word asbestos, quite rightly, strikes fear into everyone. Mesothelioma is a deeply unpleasant and always fatal cancer which is caused by breathing it’s fibres.
Throughout the last century, and right up to the 1980’s we were using asbestos in construction without any controls, until the links were found and suddenly it became the ultimate evil.
It has a bad rep, and should be left well alone and removed by the correctly licenced people if it’s broken; however; if it’s complete sheets with no damage and it’s well protected and labelled as containing asbestos then there’s no problem with leaving it be.
The sheets above are indeed undisturbed, and I’ll just take my cables around them.