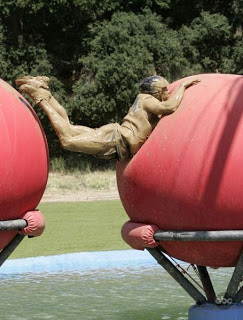 Why is there something really amusing about watching the American public utterly humiliate themselves on national television?

Watching people bouncing across giant foam obstacle courses reminds me of school sports days… except Wipeout has less tears and injuries… or perhaps a polite nod back to the classic It’s a Knockout without the daft costumes, jokers and the hyena cackling that was Stuart Hall – the man who single handedly made it watchable (although the less said about It’s a Royal Knockout the better).

The thing that really makes it for me though is the presenter John Henson who at the end of every episode says – quite straight faced – “And Big Balls”.
I doubt that means quite the same in US speak, but I know what it means over here and it’s definitely titter-worthy.
If you haven’t caught onto it yet – I’d suggest you give it a go, but pass on the UK version. It’s just not as mean, although the giggling of Craig Charles certainly does make it O.K.